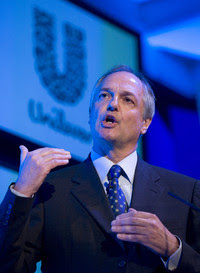 By Wayne Visser
“This world has tremendous challenges. The challenges of poverty, of water, of global warming, climate change. And businesses like ours have a role to play in that. And frankly, to me, that's very appealing.” So said Unilever CEO, Paul Polman, in a 2009 interview with McKinsey. He went on to say, “We have every day, in our business, about two billion consumers that use our brands, and so [there is] a tremendous opportunity. And if we do the right thing, we can actually make major progress in society.”

This drive to make a major difference seems, if anything, to have got bigger over the past year. At least, that’s the impression you get from Unilever’s new Sustainable Living Plan, which it launched last week. In it, they committed to double the size of the company, while halving the environmental footprint of their products, sourcing 100% of their agricultural ingredients sustainably by 2015 and helping 1 billion people out of poverty.

Commitments like that are what Sandy Ogg, Chief HR Officer for Unilever, calls “leading big”. Speaking to Polly Courtice, Director of the Cambridge Programme for Sustainability Leadership earlier this year, he said, “There’s so much going on now in the world that if you don’t have amplification and time compression, then it doesn’t rumble. So I call that leading big. You can’t let it drool or dribble out into an organisation like ours and expect to have any impact.”

Jim Collins, author of Built to Last and Good to Great, calls it having a BHAG – a Big Hairy Audacious Goal. And Unilever is certainly not the first. In 1994, Interface’s CEO Ray Anderson committed to become the first "restorative” company in the world (giving back more than they take) and by 1996, outdoor clothing company Patagonia was only using organic cotton. More recently, Wal-Mart has committed to zero waste and 100% renewable energy; Coca-Cola has pledged to become water neutral; and Tesco plans to become carbon neutral.

The fact of the matter is that without “leading big” on sustainability and responsibility, CSR efforts no longer have any real credibility. That’s because there is overwhelming data to show that past efforts – CSR 1.0 approaches – have failed to reverse problems like biodiversity loss, carbon emissions, income inequality and corruption. Instead, continued unsustainable and irresponsible production and consumption has meant business is still more part of the problem than the solution.

“Leading big” is absolutely essential if we are break this pattern of CSR ineffectiveness. When people ask what CSR 2.0 really means, there are two ways to answer. One is to say that it is about a more systemic approach to CSR, one that tackles the roots of the problem, by applying the principles of creativity, scalability, responsiveness, glocality and circularity to the DNA of the business, namely through value creation, good governance, societal contribution and environmental integrity.

The second answer, which is far simpler and no less true, is to say that the dual ‘acid test’ of CSR 2.0 is admission and ambition. Companies have to be prepared to face up (and ‘fess’ up) to their impacts; to admit that they are still a long way from being truly sustainable and responsible; even to concede that they are part of the problem. And then companies have to show their ambition, their willingness to set bold, audacious targets that will reverse the negative social and environmental trends.

In today’s world of low-trust and information overload, only bold leadership on CSR will inspire action and build credibility. Unilever and others are pointing the way and deserve our congratulations and support. They also require our unrelenting scrutiny, to ensure that “leading big” is not simply “talking big”, but rather “acting big” – making real change happen at scale and at pace.
Posted by Wayne Visser at 4:34 AM