The field of what is variously known as CSR, sustainability, corporate citizenship and business ethics is ushering in a new era in the relationship between business and society. 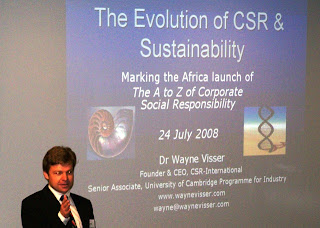 Simply put, we are shifting from the old concept of CSR - the classic notion of "Corporate Social Responsibility", which I call CSR 1.0 - to a new, integrated conception - CSR 2.0, which can be more accurately labelled "Corporate Sustainability and Responsibility".

The allusion to Web 1.0 and Web 2.0 is no coincidence. The transformation of the internet through the emergence of social media networks, user-generated content and open source approaches is a fitting metaphor for the changes business is experiencing as it begins to redefine its role in society. Let's look at some of the similarities.

As our world becomes more connected and global challenges like climate change and poverty loom ever larger, businesses that still practice CSR 1.0 will (like their Web 1.0 counterparts) be rapidly left behind. Highly conscientised and networked stakeholders will expose them and gradually withdraw their social licence to operate. By contrast, companies that embrace the CSR 2.0 era will be those that collaboratively find innovative ways tackle our global challenges and be rewarded in the marketplace as a result.