The Age of Marketing: Using smoke and mirrors 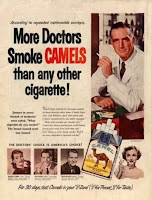 By Wayne Visser
The tobacco industry is a past master in the art of marketing-led deception. For decades, as research on the negative health impacts of smoking piled up, the industry sponsored a campaign of disinformation and deception. Let’s start with what we know about tobacco. According to the World Health Organization (WHO), ‘no other consumer product is as dangerous, or kills as many people. Tobacco kills more than AIDS, legal drugs, illegal drugs, road accidents, murder and suicide combined.’ Of everyone alive today, 500 million will eventually be killed by smoking, and while 0.1 billion people died from tobacco use in the 20th century, ten times as many will die from the same cause in the 21st century.
This is not simply a health issue, but also an economic crisis. In America alone, smoking costs the economy $76 billion in health costs and lost productivity. Smoking-related diseases account for 6% of all health costs in the USA and, on average, a smoker takes 6.16 days of sick leave, as compared with 3.86 for non-smokers. Of all the trash collected in the USA in 1996, cigarette butts accounted for 20%. There are indirect costs as well. Every year 1 million fires are started by children using cigarette lighters. In 1997, China’s worst forest fire was caused by cigarettes and killed 300 people, as well as making 5,000 homeless and destroying 1.3 million hectares of land. In 2000, fires caused by smoking reportedly cost $27 billion and killed 300,000 people.
The debate about the ethics of industry-sponsored research and the practice of misdirection by Big Tobacco reached its zenith when, in 1994, the CEOs of seven of America’s largest tobacco companies16 testified before the House Subcommittee on Health and the Environment of Congress, all denying that cigarettes are addictive. They all lied under oath. Two years later, an investigative article in Vanity Fair entitled ‘The Man Who Knew Too Much’ told the true story of Jeffrey Wigand, a research chemist working for the tobacco company, who planned to go on the 60 Minutes TV show to expose the lies and deception of the industry, including the CEOs that he labelled ‘The Seven Dwarves’. The story was later turned into the 1996 movie The Insider starring Russell Crowe as Wigand, which was nominated for seven Academy Awards (including Best Picture, Actor and Director) and five Golden Globes. Asked in an interview to separate fact from fiction in the movie, Wigand replied:
Was I followed by an ex-FBI agent in the employ of Brown &Williamson? Yes. Was there a bullet found in my mailbox in January 1996? Yes. Did someone threaten to harm my family if I told the truth about the inner workings of the tobacco company I worked for? Yes. Did the tobacco industry attempt to undermine my integrity with a 500 page smear campaign? Yes.
The industry took another public relations hit in 2005, with the release of the movie, Thank You for Smoking. It is a satirical comedy that follows the machinations of Big Tobacco’s chief spokesman Nick Naylor, who engages in PR-spin on behalf of cigarettes while trying to remain a role model for his 12-year-old son. Among the more amusing black humour scenes is one where Naylor and his friends – a firearm lobbyist and an alcohol lobbyist – meet every week and jokingly call themselves the ‘Merchants of Death’ or ‘The MOD Squad’.
Of course, Hollywood represents the lighter end of a far more serious and significant anti-tobacco lobby that has built momentum over the past two decades. We have simultaneously seen a United Nations WHO campaign and numerous governments passing legislation restricting smoking in public places and banning nearly all forms of tobacco advertising. The tobacco companies themselves have been scrambling to regain their lost credibility and to present a more responsible face, seemingly with some success.
For example, companies like British American Tobacco (BAT) have engaged in extensive stakeholder consultation exercises and, since 2001, their businesses in more than 40 markets have produced Social Reports, many of which have won awards from organizations as diverse as the United Nations Environment Programme, PricewaterhouseCoopers and the Association of Certified Chartered Accountants. BAT has also been ranked in the Dow Jones Sustainability Index, the FTSE Ethical Bonus Index and Business in the Community (BITC) Corporate Responsibility Index, and they funded Nottingham University’s International Centre for CSR. If these accolades and associations are to be believed, ‘responsible tobacco’ is not an oxymoron after all.