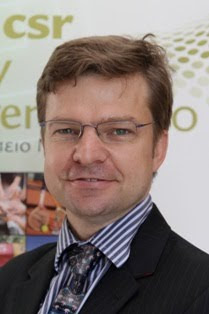 Of all the books you have written on corporate responsibility, which do you feel is the most important in terms of the message you were trying to convey?

The new one, The Age of Responsibility: CSR 2.0 and the New DNA of Business (out 18 February 2011). Not only does it fundamentally challenge business and the notion of CSR - for example, it starts by stating that CSR has failed and should either be killed off, or reinvented - but it is written in an narrative style that I think makes it an easy read, with lots of fascinating cases and stories of 'the good, the bad and the ugly' of corporate sustainability & responsibility.

Which book did you personally enjoy writing the most?

The first one, Beyond Reasonable Greed (co-authored with Clem Sunter), mainly because I used lions and elephants as a metaphor for unsustainable and sustainable companies. It was fascinating researching the traits of both species, and it was fun creatively applying the analogy to business. It was also very forward looking and together with my co-author we developed two future scenarios for business: 'Oases in the Desert' and 'Plains of the Serengeti'. We even ended up with 'leophants' - those companies in between.

What made you decide to publish Landmarks for Sustainability? Which landmark is the most significant in your personal view?

The idea behind Landmarks, which I wrote for the University of Cambridge Programme for Sustainability Leadership, was to capture the seminal events that have shaped the sustainability agenda over the past 20 years (although we also included a timeline of landmarks that goes back almost 100 years). There are certain corporate events - like Shell's Brent Spar fiasco, McDonald's McLibel trial, Nike's supply chain wake-up call and Enron's collapse - that most people in CSR have heard about, but they don't have the facts and figures at their finger tips. Likewise for positive breakthroughs in transparency, fairtrade, poverty alleviation and so-on. We also decided to make it highly visual (lots of photos) and readable (bullets, feature boxes, etc.) to make sure busy people could dip into it easily. For me, the most significant landmark event was the publication of the Millennium Ecosystem Assessment in 2005, because it shows us the extent to which all our other CSR and sustainability efforts are failing at a catastrophic scale.

Yes, it was another book for the Cambridge Programme for Sustainability Leadership and it was designed to be a highly accessible reference book. This time, however, we focused on ideas rather than events that have changed the sustainability world. Many people working in sustainability have heard about these classic books, but do not have the time to read them all, so we decided to provide short synopses, with key messages, pull-out quotes and extracts from interviews I did with many of the authors. I think it is a great guide to the most important thinking in sustainability over the past 50 years and more.

In The World Guide to CSR, what surprised you the most as you received contributions from all around the world?

The first surprise was the diversity of submissions - not just the usual suspects among the G20, but also countries like Armenia, Bangladesh, Iran, Iceland, Liberia, Peru, Romania and United Arab Emirates. The second and most delightful aspect was learning how each country's cultural tradition has shaped CSR practices, in some cases (such as in Azerbaijan, Turkey and India) with these influences having evolved over centuries.

Having now completed your world CSR tour, what are the most important insights you bring back with you?

There are so many insights: the fact that a lot of the most important social innovation is taking place in developing countries (like India), that awareness and expectations of CSR are higher in places like Brazil than in the UK, that many non-OECD countries and companies are still stuck in the CSR Ages of Philanthropy and Marketing, that Europe and America is mesmerised by the Age of Management, and that very very few companies anywhere recognise that the concept of CSR - and the larger industrial model of shareholder-driven capitalism - is fundamentally flawed and will never solve the problems it claims to be most concerned about.

How useful do you feel The A to Z of Corporate Social Responsibility remains? It was published a couple of years ago but the jargon has moved on. Do you plan a second edition?

In fact, a second edition came out this year (2010) - a paperback version with updated content, including additions on the global financial crisis and ISO 26000. Beyond this, I don't feel that the underlying concepts or the core codes and standards have changed fundamentally. It remains highly useful as a searchable reference book, especially since it is also out in an e-book version.

Beyond Reasonable Greed was an early book on the subject of corporate responsibility. Did people understand your message? What sort of reactions did you receive? Have companies traded in their fangs for tusks?

The timing for the book was perfect, as it came out just when the Enron and Worldcom scandals were hitting the headlines. So I think the message was intuitively understood, but it was not seriously acted upon. To use the language of the book, we saw the emergence of many 'leophants' after 2002. What is different, comparing this with writing The Age of Responsibility almost 10 years later, is that today there more lion corpses on the slab to dissect (like Lehman Brothers) and a number of genuine elephant companies to learn from (like Interface), as well as any number of injured leophants (like BP) that are getting left behind.

What do you feel Corporate Citizenship in Africa added to the CSR equation in South Africa? Do you feel the CSR message is understood by leading businesses in SA?

The book did a number of things. First, I would say that it was a book about Africa, not just South Africa, but it did point out the general lack of academic research on CSR beyond South Africa and Nigeria. Second, it confirmed our suspicion that most research on CSR in Africa was qualitative, with little or no country-comparative data. And third, it showed that research on CSR in South Africa was also quite skewed, largely towards business ethics. The question of whether CSR is understood by leading businesses in SA is different. The answer is unequivocally 'yes'. That is the interesting thing about many developing countries - businesses know that they can't succeed in societies that fail; often the business case is much clearer and the moral case much stronger.

Making a Difference is a call to action for individuals to leave a meaningful legacy. How would you describe your own personal legacy as you wish to see it?

Making a Difference, which is based on my PhD research, is not only about leaving a legacy, but also about what gives us deep satisfaction or meaning in our work as CSR practitioners. It turns out that motivations vary according to different leadership styles or change agent types - whether you are more of an expert, facilitator, catalyst or activist. As for my source of meaning, I most closely fit the expert type and derive my greatest satisfaction from being a thought leader (if indeed that's what I am) and inspiring others through ideas.

How much of your overall time do you spend writing/editing books on CSR?

Writing goes in waves, although considering that I have written and edited 11 books over the past 8 years, there have not been many periods when I am not writing. I suppose if I had to guess, I'd say I spend about 20% of my time actually writing, but probably 50% of my time is spent doing explicit or implicit research on which the books are based. Lately, a lot of the rest of my time has been spent sharing my thoughts and ideas with others, through teaching, workshops, training and various networks.

Which book gave you the most personal satisfaction and why?

I think that would be Business Frontiers, as this was my first independently authored book. In fact, it is a collection of my writings on social responsibility, sustainable development and economic justice over more than a decade, so it was very satisfying to see those collected together in one place. In addition, it allowed me to publish some of my more creative writing on the subject - with chapters like Holistic Business, The Corporate Battle for Hearts & Minds, Future Images Beyond the Information Age, Connecting Earth & Sky, Tree of Life, and even a poetic parable called Quest for Gold.

Which book about CSR have you not written yet?

There are many I have not written, and in fact I turn down book projects fairly regularly now. The more compelling question is, what am I passionate enough about to want to put in the blood, sweat and tears required to turn it into a book? I'd like to write up my CSR Quest world tour as a kind of travel book with a CSR twist. I'd also like to do a book on Purpose-Inspired Leadership, as well as writing a business parable (i.e. fiction book) that captures the lessons of CSR but never mentions the word. And I'd like to do a book calledSmart, Sustainable and Inclusive, which tackles the macro-level of economics and culture, rather than the micro-level of companies and CSR.

You are also somewhat of a poet and have published a collection of poems? Is this an insurance policy in case CSR doesn’t work out ….. ?

Were it but so! No, not really. Poetry is just my way of expressing a deeper level of myself and being a bit creative (alongside my dabbling in painting, sketching and photography). It is probably my most authentic voice, but poetry is seldom the stuff of fame and fortune. It's a very personal and subjective hobby, which I do primarily for myself. If the words resonate with others - as they do seem to on occasion - then that's a bonus and I am delighted.

I had to look it up, so I guess that is an answer in itself.

Anything else you want to mention?

People should know that I'm more interested in what is being done that what labels we give things. It so happens that I talk about CSR 2.0 - which I also call systemic CSR or radical CSR - and I use CSR to mean 'corporate sustainability and responsibility', but I really don't care if people have different jargon. For me, the proof must be in the results and for too long we have focused on measuring CSR activities rather than the societal impacts of business. My new test for whether a company is a CSR 2.0 pioneer in the Age of Responsibility is simple: what is their level of admission and ambition? i.e. do they admit the extent of their unsustainability and irresponsibility, and do they set audacious targets like zero waste, 100% renewable energy and rising stakeholder happiness.

Note: All Wayne Visser's books are profiled on his website, including many free downloads