Reflections on CSR in India

I spent 10 days in India in April, hosted by my friend and CSR scholar Bimal Arora. It was a jam-packed itinerary, with workshops, lectures and talks in Mumbai, Raipur, Delhi and Pune. Apart from infernal temperatures (30 degrees Celcius at night and many days over 40), it was wonderful to soak up the sights (mainly traffic) and sounds (mainly hooters) as we travelled around. I left with a number of impressions on CSR. 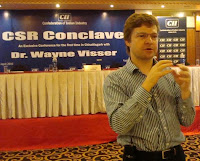 First, as expected, CSR is still largely philanthropic, building on long and proud traditions from family empires like the Tatas and concepts like Gandhi's trusteeship. But we see government playing a very active (and in my view sometimes misguided) role. Not only do they guarantee 100 days of work each year for each of India's 60 million rural households, which is incredible, but they also require all public companies to set aside 2% of net profits for CSR programmes.

Now there is a proposal to extend this "mandatory CSR" to private companies as well. This is essentially just an added tax and should not be called CSR. In my view, governments should focus on effective regulation of the issues that CSR is trying to address (biodiversity loss, labour conditions, climate change, transparency, etc.) rather than regulating CSR activities per se. Regulating CSR directly simply creates bureaucracy, stifles innovation and invites corruption. 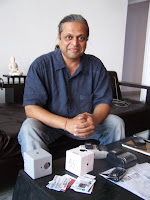 A more positive trend are the social enterprises that are bubbling up. Among the most inspiring is Arurag Gupta, the Founder of A Little World, which provides hi-tech innovations for the rural poor in India, including micro-banking, lighting, media and sanitation. I had the chance to interview him and he explains how biometrics and LED technology is being used to serve the poor. (Here is a link to the interview).

Aligned to social enterprise is the power of social activism should not be underestimated. I came across a great example in the form of Karmayog.org, which has created an online platform which allows citizens to publicly report (and presumably embarrass) any instances of corruption, such as an official asking them for a bribe. It is also used to pool NGO resources during times of crisis, such as flooding, and to share CSR Ratings that they have conducted on Indian companies. (See an interview I conducted with the founder). 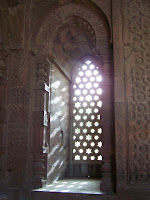 The other positive sign from India is "inclusive business", where the bigger companies like Tata are designing products and services to cater for poor customers at the 'Bottom of the Pyramid' (which in India is just called "the market"). The Tata Nano - a small eco-efficient car for $2,500 - is a case in point. What is even more encouraging is that these products are not being accepted without question. In one of my workshops, we had a raging debate about whether it is a good thing to have every Indian driving a car, Nano or not.

India is certainly a space to watch on CSR and its progress is far from being a foregone conclusion. Whereas there is a sense of order and control in China's great transition, India is far more chaotic and unmanaged (or unmanageable?). It is almost as if there is a Grand Experiment in CSR - democratic, messy, ad-hoc Indian style or controlled, managed, sanctioned Chinese style. Which will prevail is a question for future historians. I think it's too soon to place bets on either.
Posted by Wayne Visser at 11:20 AM