Reflections on "The Top 50 Sustainability Books" 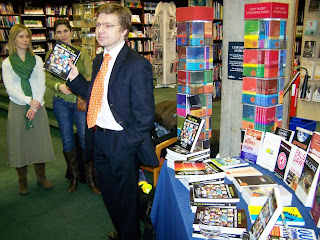 On 8 December 2009, I spoke at the launch event for my new book - The Top 50 Sustainability Books - at Heffers bookshop in Cambridge. At the end of this 3 year project, it is both a relief and a triumph to see the book in print - and it looks great, even if I say so myself! :)

One of the comments by our bookshop host was that they were surprised (and delighted!) that the 50 books were so diverse. That is certainly true, and there were some surprises even for us - books like A Sand County Almanac and The Dream of Earth were not even on our radar screen before we conducted the poll among the Cambridge alumni (on which the list is based).

In addition to this, I had three main reflections that I touched on in my brief talk, largely based on the

interviews I did with around 30 of the authors:

Two anecdotes about the late Donella Meadows stick with me (as told by her ex-husband Dennis). On her door, she had a quote that said: If I die tomorrow, I would still plant a tree today. And when people used to ask her if we have enough time to solve our global problems, she would always say: Yes, precisely enough time, if we start today!

To me, these capture the spirit the lies at the heart of sustainability. It is an optimism built on making a difference; an attitude of action for hope.

For more information on the book, see here.